I just finished some new, poetry-related t-shirts on my cafe press website. Lookie:

In the timeless battle of poem vs. sandwich, who wins? 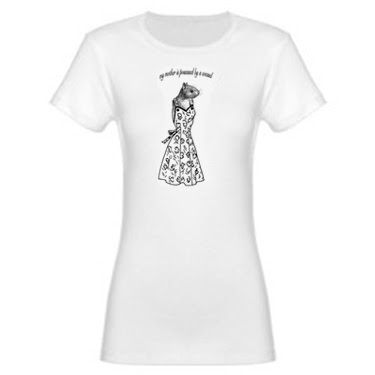 This one says "my mother is possessed by weasels" in script, if you can't read it. 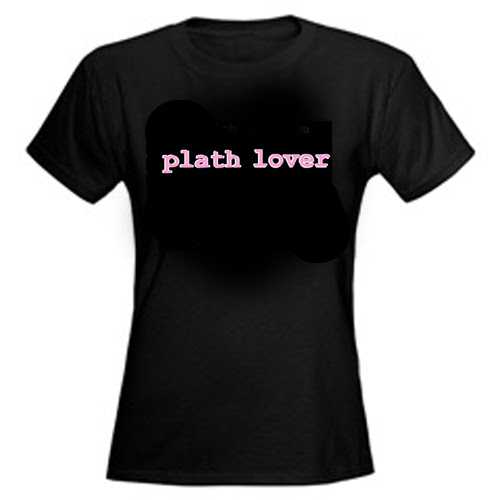 The Mermaid of September Cove


Shelia worked the tank at the end
of the bar until, after her 38th birthday,
she took up smoking and ran out
of air (the plastic tubes hidden
in the rocks no longer enough)

but for years she could never get enough
of the water, how her hair rippled out
like a dark blank flag when she twisted
around her giant plastic clam, how
her skin stopped feeling like skin by
the second hour, became an empty
skein of silk

she learned, better than all the other girls,
how to cross her feet inside the glistening
sequined tail and pump with her thighs
like she was standing on bike pedals,
so she shot across the sandy bottom,
stirring the indigo pebbles and dyed green
shells, making them flip and shimmer
in the heavy water

for the five dollars tucked in their fathers’
back pockets, little boys could slip
under the railing, get close to the glass

if they stood very still, lips not even moving,
Sheila would give them what they wanted,
would come up to the transparent wall,
extend her bluish hand until she was palm
to palm with the stunned boy

it was something, she knew, he would remember
the first time a girl agreed to be naked
in front of him, something so astonishing and
weird, he’d forget to breathe,

Email ThisBlogThis!Share to TwitterShare to FacebookShare to Pinterest
I bought a new cat carrying case this afternoon, and I had to carry it all through New Jersey, New York and Queens. A really perverse part of me wanted to pretend I had an invisible cat. People kept peering into the case. I just managed to control the impulse to squeak in a baby voice to my imaginary cat “Mr. Quibbles” and stick my fingers through the wire to touch his transparent nose.

girls’ slips get caught on windowsills cheeks and elbows shine in the dim yard whispers carry all the way to the attic their scent (all lavender confusion) carries downwind they hide in plain sight under the front porch behind the rose bush in the apple tree they beg to be found bite their wet tongues in anticipation of the tickle the pinching they swoon from boredom sitting still dying lightening bugs fill their ponytails miniature spiders lodge in their hems inchworms coax shivers down their shoulders the sun slings low as they set their chins on folded arms and sigh
Posted by Christine E. Hamm, Poet/Professor/Painter at 2:33 AM 2 comments:

the last lemon shrinks
by the light of the Tiki fire
between torches stuck in sand
rough hewn table, palm trees
and coconuts

your hammock leaves diamond
marks on your legs
you wake often and fall
but nothing ever breaks
no tooth, no phonograph

every day exactly
like the tour before
Posted by Christine E. Hamm, Poet/Professor/Painter at 11:33 AM 3 comments:

The Secret Lives of Women


You have to go through
a river to get to it

she can tell the colors
of yarn just by touching them

on the water slide she learns
something new

in the Belgian fashion district,
the croissants taste like
their fathers’ boots

Grandma knows something
unusual is going on, but only
whispers into her palm

in the remake of this movie,
we see the sky is actually
getting lighter
Posted by Christine E. Hamm, Poet/Professor/Painter at 10:50 PM No comments:

My Father’s Ghost Visits me on Christmas Day

Although he still lives across the dull glowing country,
making my mother languish with his gifts of heavy jewelery,
his thumbprints bruised onto her ankles.

I had the whole the day spread out in front of me like
a morning smorgasbord at a red-tipped restaurant,
drunk with space and ignored obligations,
decked out in soft starred pajamas, eating canned peaches
with my fingers, on my second cup of bedside champagne.

I haven’t seen him for two years and he’s bluer around
his hairline, mouth twisted and pale. His suit jacket,
indigo, stained, hangs off his shoulders like it was made
for a much bigger man. He wants me to say something
to him, I know, so I reach across the bed and turn on

the radio, try to find something unseasonal and blaring
until jazz coats the air with bright yellow hisses. He’s
still there, doesn’t move or turn his head, just looks
thirsty and wistful, as if he wished there were something

I might give him. In a moment I will be after him
with a broom, rush him out the window, but for now
I just let him simmer in the empty air, learning
what it feels like to know you will get nothing from
someone who has their hands full of sweetness and gold.
Posted by Christine E. Hamm, Poet/Professor/Painter at 1:31 PM No comments:

Tired and excited. I stayed up all night redoing my "Saint of Lost Causes" manuscript, and I think I've got it in a really nice order. It reads a bit like a novel; starts with the birth of one character, through her childhood, into her adult life where she struggles to get pregnant. Then it follows the birth of her daughter and their relationship, her daughter's childhood, then evolves into a focus on the daughter's mental illness/saintly visions. That's the first section, titled "Saints". The second section is entitled "Cannibals" and explores various fairy tales, with a strong focus on Hansel and Gretel. I just have to put the table of contents together and I'm done. Boy, I swear I never want to read another poem of mine. I'm so sick of looking at all those little poems. I'm going to send the manuscript to Ausable Press. I have about 5 days to mail it!

Also, I went to a Purple Party (hosted by the fab Colleen): 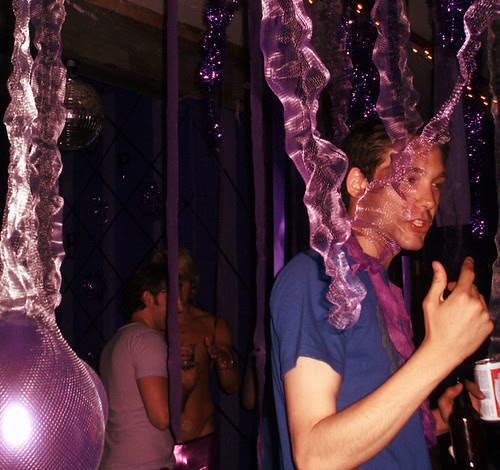 I updated my Etsy shop with some supercheap but spectacular cards and books!
Posted by Christine E. Hamm, Poet/Professor/Painter at 12:38 PM No comments:

Email ThisBlogThis!Share to TwitterShare to FacebookShare to Pinterest
Starling

Wings gleaming
like the slick oiled
lids of a woman’s eyes
in an empty bar.
Everyone and
no one at once.

If you stand still
enough in the sun
it will come,
vain brother to the
crow, blue simmer
of feathers,
landing oh so delicately
to grasp at your
spread thumb
and peck
whatever you
offer from your palm.
Posted by Christine E. Hamm, Poet/Professor/Painter at 11:29 AM 4 comments:

in the bathroom
I didn’t want to look but you
pulled down your blouse anyway
so I stared at your mouth, greenish
our angry bruise
Posted by Christine E. Hamm, Poet/Professor/Painter at 12:26 AM No comments:


Somewhere in this sinking there’s a map.
your sunscreen and rubber bands drown

the remaining monarchs. hardens and sheds,
scatters from windows, regroups in migraine

blue sores swimming with reddened women.
always burning somewhere. too bright to do

anything but lay back and sigh. hotel windows,
poor mirrors, etch letters from a dream language

on the writing desk. hidden under his tan Spanish
carpet. all the flesh colors on his pillows. empty

or sleeping. overcome by their weekend sunburns.
shrivel and hold still. entitled to your own fountain.
covered with white birds, choked with ashes.
______________

Peeps who want their Vispo card, send me your address! Last chance: inktastesbitter (at) yahoo.com
Posted by Christine E. Hamm, Poet/Professor/Painter at 11:05 PM No comments:

Email ThisBlogThis!Share to TwitterShare to FacebookShare to Pinterest
So I’m back. I had a good time. I enjoyed Disneyland until all the gender role crap piled up and collapsed on me. But they’re right. Disneyland is like a dream, so clean and neat and green and full of food and happy families. At least in the morning, before everyone gets tired and the screaming and hitting starts. It’s not my dream; it’s someone else’s dream, so it’s a little surreal to move through.

I went to the Haunted House! Ahh, memories. But the mechanisms in the animatronics are too noisy now. Still good use of dry ice, though.

I got along very well with Mario (my husband) leaving the door open for further trips together. I hope. LA was chilly but had very nice light and I observed several things:

In LA, you are forbidden to have food or talk.

In LA, there are palm trees: 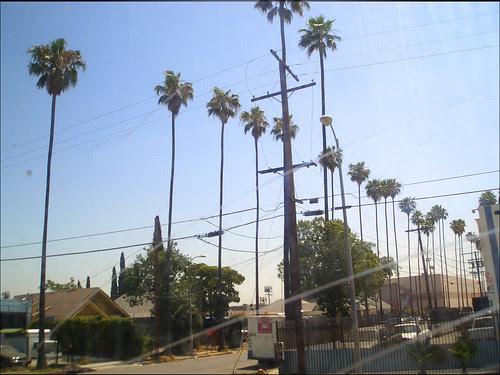 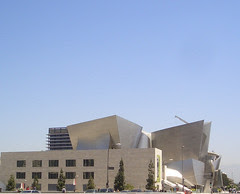 I have (some) free time before summer school starts and I start teaching again, so I’m trying to go through my old notebooks and type up the poetry that never made it to the computer. Here is one. Comments are welcomed. Throw rotten vegetables if necessary.


( I got straight A’s this semester. Almost makes up for the yanked Shakespeare prize.)
Posted by Christine E. Hamm, Poet/Professor/Painter at 12:23 AM 2 comments:

What to do While I'm in the Hospital


Lower your voice.
Remember, Emergency Contacts
are stored under your tongue.
Please put the soup in the stove and
set the baby on fire. You will find
matches in my purse. You may
pick up your check and let
yourself out when you are done
with the frozen pigs. Please
have a mint chocolate on me.
Posted by Christine E. Hamm, Poet/Professor/Painter at 12:17 AM 6 comments: