It's now available for pre-order here.

Should ship to you in 14 days. (God Willing. Praise Allah. If the Buddha with his great smiling fat cheeks wills it so.) 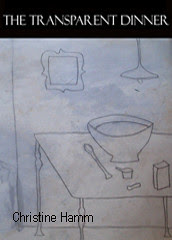 I did something fun this time when I was writing a poem: I saved all the cut-out parts (and even some of the parts I kept)and made them into another poem. So now I have two poems, front and back. Tell me which you like better.

Miriam’s father
grunts and shuts off the lights behind her
we must save, we must save lights out at ten

(thermostat at 62)
the oil bill’s been through the roof

up in the attic squirrels
ooze through the roof-hole
set up a formal dinner
with Miriam’s miniature tea set
buried in a hat box since she was ten
when she held her red braids
between her teeth
& ran into the street
(Mrs. Webster swerved and hit the orange tree)

after the late, late lawnmower has finished gnashing
Miriam listens to KROC under the sheets
until all the twittering bedsprings
rest their squeak

above the stove: the garage: the coat closet: the basement stairs: the crawlspace (tang of ant poison):under the sink: the refrigerator: the porch: the five in the livingroom--including both
sides of the brown velvet couch
& the spot above the fireplace that shines

(not even chipped)
(Mrs. Webster swerved and hit the orange tree)
(gas and dirt, smoke) on their fortified front doors
the squirrels unpack the tiny china
(before)
spread it in rows on a kerchief
(with their teeth)
(in the corner)
(bedroom, bathroom, kitchen) (tongues)

until the late, late have finished gnashing
(into the Osgood’s front porch)
down the street & all the fathers
have said the same words about the weather turning the keys

the late, late lawnmower has
and
(next door) (the same words about the weather)
in all the rooms (has finished)
the carpets and heavy, heavy drapes settle
(with a sigh) lawnmowers
(with a sigh)
(into weightless dreams)
(random) the ends of
bright as an electric charge
(spoiled fat) (blasting through a wire): (musty cardboard): (wet dog):
(rotten pine): (ant poison):
(bleach): (old spaghetti): (wet grass and exhaust): (potpourri)
(pine sol and ash)
(on the portrait of the woman (crouching at a stream))
Old Chanel
(that light)
(can hear (that light)
Posted by Christine E. Hamm, Poet/Professor/Painter at 1:03 AM No comments:

The reading at 440 was so great! Not only was the other reader (Erika) fantastic, but Brendan Lorber and Tracey McTeague stopped by and heard me read. Luckily I didn't realize they were in the audience until I finished reading. Cause I would have been so nervous I would have wet myself, otherwise.

And Tracey was so impressed by my poetry that she asked me to read at her series, Battle Hill, in March. I feel so affirmed by this. I think I'll be happy for a whole week.

Also, I finally set up a page for the book. Which should be arriving as my doorstop (I mean at my door step )by the second week in Oct. Which is pronounced "OCKED".
Posted by Christine E. Hamm, Poet/Professor/Painter at 3:53 PM 4 comments:

Millions of These Particles Fall Onto the Earth Everyday

someone else’s dream. All morning I thought
of it, queasy, stirring my coffee with a pencil,

sharing my bathroom stall with a Lipizzaner,
who I think blushed as much as I. The angora

until I sneezed my chair into the conference room.
The woodchucks paused with vague hostility,

then continued their power-point presentation.
I finally realized I had forgotten to wear pants

and there was turtle clamped around my crotch.
Closing time was early, around 3, because of

coast of our mother. I gave up trying to get off
my turtle with a fork and decided to ride a mule

home, rather than the subway,
though it was

a bit more
expensive.
Posted by Christine E. Hamm, Poet/Professor/Painter at 12:49 AM 2 comments:

I'm reading. I'm doing a reading. My lips will be moving as my eyes peruse certain infamous passages in certain nearly banned books in a previously undisclosed location.

JOIN US FOR A READING AT PARK SLOPE’S 440 GALLERY!

(AND PLEASE ALSO SCROLL TO THE BOTTOM!)

Christine Hamm is a PhD candidate in English Literature at Drew University, where she was awarded a Caspersen Scholarship for Academic Promise. Her poetry has been published in The Adirondack Review, Pebble Lake Review, Horseless Press, Lodestar Quarterly, BlueFifth Review, Poetry Midwest , MiPoesias, Rattle, Snow Monkey and Exquisite Corpse,blah, blah, blah... (this is getting a bit much). In 2004, she was nominated for a Pushcart Prize. Her work has been anthologized in Homewrecker: An Adultery Reader and The Murdering of Our Years: Artists and Activists on Making Ends Meet, both by Soft Skull Press. Her full-length book of poems, TheTransparent Dinner, is due out from Mayapple Press in September '06. (Err, uh, October.)

Erica Fabri is a poet and educator. She is the author of High Heel Magazine, a chapbook of poetry. Her work has appeared in MiPoesias, Good Foot Magazine, and Got Poetry? AnOffline Anthology. She currently teaches creative writing at The School of Visual Arts, Baruch College and Lehman.

September’s featured artist, Todd Erickson, will give a brief talk on his work:
http://www.440gallery.com/artist_terickson.htm

My book, The Transparent Dinner, is arriving quite soon, and just now is being gently
massaged at the printers. If you would like a postcard in reference to said book, and also perhaps a little bit of a little poem, please send your address to the email
following: inktastesbitter@yahoo.com. Also, I'm going to give free copies of my book tosix deserving peeps who are willing to do a little review work for me. Contact me at inktastesbitter@yahoo.com for details.
Posted by Christine E. Hamm, Poet/Professor/Painter at 5:32 PM No comments:

I'm so excited! I just got interviewed by a real reporter for my University's newspaper, The Acorn. I got asked all sorts of questions about my writing and was majorly inarticulate. Well, I think I got my point across. I kept getting asked, why did you pick The Transparent Dinner as a title? and all I could say was, cause it's like my poems are about a dinner? That's transparent? Transparent like glass. Um, it's a metaphor you can see through. It's a meal made of glass. It's... it's... it's about meals whose motivations you can see through, like a person whose motivations are transparent?


Anyway, I have the photoshoot tomorrow. Let's hope that goes a little better.
Posted by Christine E. Hamm, Poet/Professor/Painter at 3:37 PM 5 comments:

The indescrible Mr. Colby has a blog. Good. Now I don't have to be stalking him all over the internets.
Posted by Christine E. Hamm, Poet/Professor/Painter at 1:54 AM No comments:

Email ThisBlogThis!Share to TwitterShare to FacebookShare to Pinterest
I've got a poem and some pictures. I have been so very, very busy. I've had time to write, but not to type up the poems.

So finally here's a longish prose poem. It might be able to be cut some places. Your suggestions are welcome. 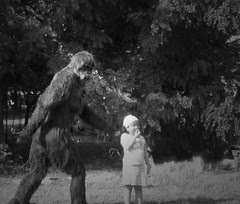 My Husband Changes the Subject

My husband demands I scratch his back again, hard this time, with my fingernails, like I mean it.

But I’m bored already, trying to avoid the scab where the saddle rubbed him raw, watching our large pink cat at the window, stuck in an impossible yoga pose, cleaning himself. My husband calls the pink cat vulgar, we have the most vulgar cats! he shouts. I keep scratching half-heartedly and my husband tosses his forelock out of his eyes, asks me who’s the best person in the room, no, not just the room, the whole apartment building! I answer that I am, of course, and he exclaims, no, it’s me! And then he asks who is the craziest person in the room and I poke him with my nose, breath in that deep scratchy scent of hay and dung, and say, the pink cat, and if not him, perhaps the little quick black one.

My husband changes the subject suddenly: Who has the biggest ass? But I mean, the biggest, biggest ass? So big you can’t fit out the door? So big it eclipses the sun? It has its own zip code?

And I pause, rest my check against the white spot along his ribs, the part I say looks like Bush, but he claims is the county map of Santa Clara, and I say, hmmm. Me?

Yes, he says, It’s so big! Big and splendid!

He then jumps up and stomps his right hoof, once, twice, lifting it way high up, and yells, Everybody dance!

He shakes his enormous haunches in a spastic rhythm, left, right, front, the cats hiss and flee -- he looks like he might never stop.

And here's some pics from the art fair today. In Queens. 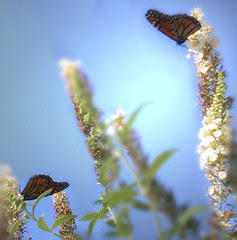 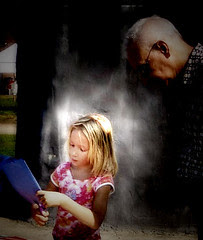 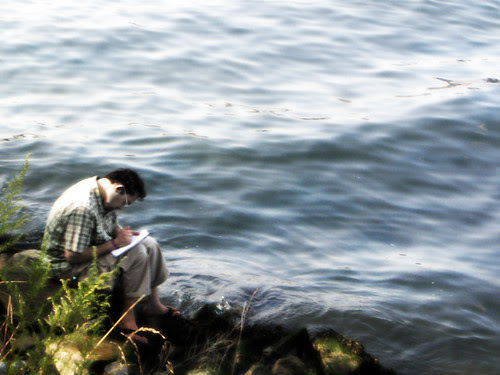 Posted by Christine E. Hamm, Poet/Professor/Painter at 1:17 AM No comments:

My poetry book (the transparent dinner) is thisthisthis close to being finished, and I'm supposed to round up five places to send it for reviews. Anyone have any ideas?

Also, any suggestions for places to read in NYC? I already have Ear Inn, I need a couple more.

Moreover and furthermore, if anyone would like a postcard bearing the likeness of the
cover of my book, with a bit of a poem not found anywhere on the web (or in any book)
printed on the backside, please send your name and address to inktastesbitter@yahoo.com.

Thank you all so kindly.
Posted by Christine E. Hamm, Poet/Professor/Painter at 10:41 PM 2 comments:

a room full of fluttering children:
I feel their eyes piercing the loose fabric of my back
as I misspell at the black board

I tell them to repeat after me
as they hold my death in their brand-new palms
and they stroke its back gently and smile
Posted by Christine E. Hamm, Poet/Professor/Painter at 11:10 PM No comments: