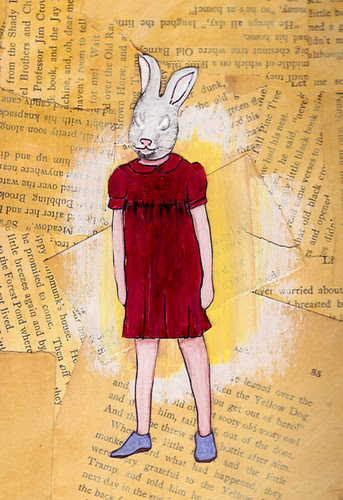 This is what happens when I try to introduce myself...

I can't hear the Seattle or California. I believe that means they're mine.
Posted by Christine E. Hamm, Poet/Professor/Painter at 1:13 AM 1 comment:

you lean over the boat's metal railing
and vomit the day's stale meal, canned

cherries, pickled oranges, the salmon
from another country, as you are distracted

we shuffle back to your cabin, you wiping
your mouth with your pink silk sleeve

as you recline on velvet pillows, I offer you
more brandy, this time I promise

the flames will not go out, fever sweat
coats your upper lip, I unbutton your shoes,

your skin grays like the sun, your eyelashes
lick upward, settle

what kind of woman lies so easily, I ask myself
your gold rings cold, small as bird hearts, in my palm
Posted by Christine E. Hamm, Poet/Professor/Painter at 12:53 PM 3 comments:

thick waves of chocolate and gasoline

and electricity streams
from my tongue to your thumb

above our raft of cotton sponges,  trees on their heads,
roots swirling,
passing, cracking, shivering,
shedding earth and worms

the little animals killed
and lied about

a doll's table
set with glitter and flames,
turning, dipping

your ivory handcuffs, scrimmed
with our mother's lost recipes

built for our bodies
Posted by Christine E. Hamm, Poet/Professor/Painter at 12:28 AM No comments:

I made this for a friend's birthday party, today! I had to work really fast. Hopefully the paint will dry by the time I give it to her. 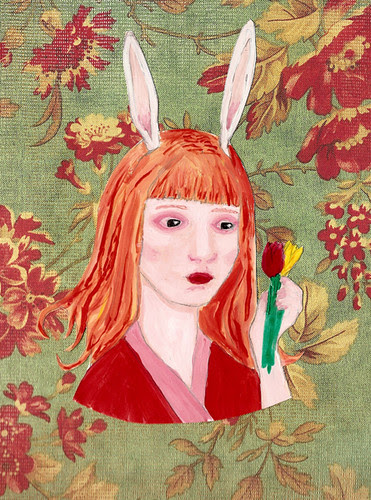 Posted by Christine E. Hamm, Poet/Professor/Painter at 5:32 PM No comments:

alone on stage
except for the music,
a man in the shape of a boat,
in the shape of lava rippling
down the mountain, slow, lardish,
white as regret, we watch

because it's weird, because it's
nothing we've ever seen before
except maybe in medical textbooks

a handful of walnuts in each portion
of drooping skin, in each flap like
the flaps of a shark's gills, a whale's
gills, and he's a white whale of man

thighs, calves swollen into the shape
of rough buckets, the texture of lard,
the color of lard, the lard kept

next to the kitchen sink in a rusty coffee
can, lard spooned out to fry chicken, steak,
then scraped back into the coffee can after
the lard has hardened into its soft white
shape, dunes of it slapped against the side
of the pan like sand dunes, like it was built
by waves beating against the force of it,
the heft of it, and the flaps hanging

off the fat man ripple in waves,
and then he stops dancing and he picks
his dress up off the floor, and it's enormous,
the biggest one we've ever seen, green
as the earth in paintings, as the noon sky before

a storm, and he's fitting it over
his enormous arms, and he pulls it
down over his shoulders bulging
with soft fistfuls of fat, and the hem
falls softly like a sigh to his ankles,
and we see it has sparkles everywhere,
it's like the fucking stars on fire

Today I went jogging again and I still ache from it but I had the entirely joyful experience of reaching the nearby sculpture garden when I ran and seeing some really hot artists (I'm sorry, they were good-looking, I can't help it) work on finishing their sculptures for the big opening this weekend. One particularly GQ looking guy with a goofy grin was packing the earth around his wooden structure, which was kind of like a smashed house, and a mocking bird perched directly above him and sang all the songs of all the other birds. I tried to get closer to hear better but the bird flew away. However, as I left the park, the bird followed me and perched on a telephone pole and started the whole cycle of songs again, and even included the noises of crickets, which was quite cool, as I haven't heard a bird do that before.

Also, I heard Philip Levine read. His work was ab -fab. I didn't think I liked him before, but I definitely do now. I got to see him because my lovely friend Whitney with the beautiful hair that falls in her eyes got an invitation and invited me. We agreed that Philip was wonderful but disagreed about the fiction writer, who will go unnamed but who makes boring female characters with no real emotions.

One of the most interesting things about the reading was that the audience was comprised almost entirely of aliens -- excepting myself and my friend. They were older white people, the likes of which I had never seen before. They were all dressed the same, they all had the same body language, and I'm sure they were all semi-famous writers who were quite satisfied with themselves and their lovely work about men and women who are just too numb to feel, dammit, and who display their inability to feel in silence and thoughts about the light or street in front of their houses. They were frumpy in a rich way, and occasionally exchanged piercing looks. They moved slowly but significantly.

I think I will never end up that way, but I might end up in a roomful of "them" someday.


Posted by Christine E. Hamm, Poet/Professor/Painter at 2:05 AM 3 comments:

Driving with the Top Down

You're touching my waist, my hips, but it's not you,
it's the guy who looks like you and we're climbing

the stairs between rooms of warm pink light, complicated
wallpaper and soft, soft gray couches.  One of my

friends -- the long-haired one with hand tattoos --
is trying to teach us guitar, but we can only watch

each other's lips and tongues.  Your words have a
feel, they feel like felt or a wool skirt and everything

its guitar music and lacy pink drapes, but you catch
my hand, you grab me by the elbow and haul me

up and you say, next time, I'm driving.

Posted by Christine E. Hamm, Poet/Professor/Painter at 10:55 PM No comments: