My profound apologies for taking so long with your work. I kept wanting to spend more time with it, and not having the time.

To get to the point: I'd like to publish "The Transparent Dinner." I will probably want to suggest a few editorial changes and perhaps cutting the length slightly, but let me get the most important part out of the way for you first. The poems are strong, often scary and sometimes very funny. I think they'll be a good addition to Mayapple Press's lineup._____

I'm so happy I'm like drunk with the happy! Spinning around, talking to myself.

Posted by Christine E. Hamm, Poet/Professor/Painter at 11:39 AM 16 comments:

Hey! I just sent in my entry to Spire Press's contest, in the nick of time! I had to run to the mailbox! In the middle of the night! In the rain!

Joy, of course, and a mess on the floor.
Strangers spinning round the bedside,
chlorine pools diminishing.
The light stands still in bowls outside.

You rise from the porch of your
father’s undoing while the clouds
dissipate. Party goers pass
on either side, shake their shoulders
as if to boogie or make trouble.

You will do both, handful
of foot and gum,
precious bowl.
Posted by Christine E. Hamm, Poet/Professor/Painter at 11:03 PM 2 comments:

This is very rough. Please let me know which stanzas don't work.

Do not eat potatoes mixed with milk.

Do not braid your hair too tightly
or your baby may have a small, confused
brain.

Do not watch too much dramatic cinema:
it can cause the baby to cry, hastening its
birth.

Avoid smelling fresh lilacs or gladiolas;
they can cause unsettled dreams.

Do not allow yourself to be frighten by rats
in the cupboard, or your child may have
fur all over its body.

Do not mix tea with honey, or the baby
may emerge golden and lax.

Avoid striped cats, especially if they
are missing an eye.

Do not sit within a foot of a fish tank;
the baby may turn green and melancholy.

Do not speak harshly to your mother;
her tears can enter your milk and sour it.

Avoid eating spaghetti spiced with too
much garlic -- your child will be colicky
and of angry disposition.

Avoid laying-a-bed after eleven o'clock;
the legs will begin to swell and the knees
become fixed.

Do not speak ill of your husband, even
when he can't hear and especially do not
write down words of criticism. Your child
will be born distracted, hating himself.

Do not ride in a boat just before birth;
the child will resemble a turtle and slip
down the toilet when your head is turned.

Avoid staring too long at the child
passing by in a stroller, no matter
how teary and curious her enlarged
eyes, or your child will be envious
and thin.

Most of all, do not read overmuch,
as the ink will stain the baby's hands
and she will emerge marked already,
guilty.
Posted by Christine E. Hamm, Poet/Professor/Painter at 10:43 AM 2 comments:

Email ThisBlogThis!Share to TwitterShare to FacebookShare to Pinterest
Although this is very late, I want to crow about how wonderful it was to hear Shanna Compton and Elise Miller read at the Bowery Poetry Club. They were both fantastic, and touching, and surprising, just as I suspected. Elise was looking so good I thought she had some "work done" but it turns out...not, and Shanna looks like a fairy princess in some lights, which I definitely hadn't noticed. Everything was just extremely pretty with a little strange thrown in, and my ruby slippers brought good luck as usual.

I finally got a copy of Down Spooky and it is... well, beautiful and odd beyond description. You must buy it.

Elise will be publishing her book soon! I hope so I can buy it.
Posted by Christine E. Hamm, Poet/Professor/Painter at 10:33 AM 1 comment:

I'm lucky to be hosting a pair of fabulous writers tomorrow night (11/16: Open mic at 7:30, readers at 8) at the Bowery Poetry Club: Elise Miller and Shanna Compton!

Elise Miller hosts and curates the monthly reading series, East Side Oral, “the reading series your mother warned you about,” at The Living Room on the lower east side. The next show is sometime in December. Elise’s first novel, Star Craving Mad, was published by Warner Books and was optioned by Madonna’s production company. Personal essays from her collection, COCK-CRAZY, can be read on nerve.com, smallspiralnotebook.com, and freshyarn.com. Reach her at elisemiller.com.

Shanna Compton's book Down Spooky won the 2004 Winnow Press Open Poetry Award. Her poems have appeared or are forthcoming in The Best American Poetry 2005, Verse, McSweeney's, Gastronomica, No Tell Motel, Unpleasant Event Schedule, Eye-Rhyme, and elsewhere. She is the former curator of both the Frequency Series and the Soft Skull Sneak Peek Series. She is an editor at large for LIT at New School University (and served as editor for issues 7-10) and the Associate Publisher of Soft Skull Press. She recently edited an anthology of essays on the subject of video games called GAMERS: Writers, Artists & Programmers on the Pleasures of Pixels. She teaches poetry & publishing at Bowery Arts & Science and the New School (first class January 2006). Her micropress Half Empty/Half Full specializes in poetry chapbooks and broadsides. Originally from Texas, she has lived in Brooklyn, NY since 1995.

foot of First Street, between Houston & Bleecker
across the street from CBGBs
F train to Second Ave, or 6 train to Bleecker
Posted by Christine E. Hamm, Poet/Professor/Painter at 7:36 AM 1 comment:

Although this is a bit late, I wanted to let you know about the reading I gave as part of the Atomic series, hosted by Cheryl B, who is the nicest chica ever, and someday, I may aspire to her level of coolness. Here's herblog.

I was lucky enough to read with some real pros: Lisa Selin Davis, Tsaurah and Andy Horwitz. For the full scoop, go here. This is the second time, I've read with Andy -- the first was in 2001 when I was just starting out as a poet, and he was already rich and famous. Okay, famous. Well-known. His piece this time had a slightly different tone than the one in 2001, but it was just as brilliant, if not more so. I want him to put out a book so I can read it.
Posted by Christine E. Hamm, Poet/Professor/Painter at 9:24 PM No comments:

Fertility Rites for a Daughter

I have followed the instructions carved into
the bathroom wall at the desert service station,
hints about how to trap a child's spirit into flesh
no matter how shiny and quick, no matter
how much like a ribbon escaping out a car window,

I have taken lessons from how the crows and robins
make their nests, sticking bottlecaps and barrettes
under my mattress, weaving twigs into the cracks in
my headboard

I have sewn spirals into the curtains, strung red prisms
from the lamp shades to hypnotize the fleeing light

I have opened the cupboard door and taken out the salt
strewn it into stars on the floor
so she will sit and stay, fascinated by the constellations
stuck to her soles

I have dug up the carrots and beets in the garden
beside the porch, left deep brown clefts for her
to rise out of

I row a boat, every Sunday, to the center
of the still lake, and feed
the pike rising to the surface
my fingerprints

I put a pillow under my ass and turn off the TV
Wednesday nights, humming into a different man's
neck each time, singing, come to me, come to me,
in a language only possibility knows
______
Posted by Christine E. Hamm, Poet/Professor/Painter at 5:34 PM No comments:

Jumping on the Dead Kitten bandwagon. And why not?

The Kitten by Mary Oliver

More amazed than anything
I took the perfectly black
stillborn kitten
with the one large eye
in the center of its small forehead
from the house cat's bed
and buried it in a field
behind the house.

But instead I took it out into the field
and opened the earth
and put it back
saying, it was real,
saying, life is infinitely inventive,
saying, what other amazements
lie in the dark seed of the earth, yes,

I think I did right to go out alone
and give it back peacefully, and cover the place
with the reckless blossoms of weeds.

More listless than anything,
I push the lively yellow dump truck
with two small working headlights
on either side of its mechanical face
from the empty lot next door
and raise it on the mound of rotten carpet
behind the C-Town grocery store.

I don't think about taking it from
the garbage heap or telling the bulbous boy
who lives on the other side of the Bronx.

But instead I try to leave it out on the wasted pile
then, as the air closes about it,
I take it back

not saying whether it is real
or whether death is so mass-produced
and regular as this
not saying what other finite boredoms
rise from the prow of the garbage barge, no,

I don't think about whether I did wrong
to clench my hands together with the cheap
mechanical Mattel smile
and finally, hold it to my heart to keep, violently,
in that place at the foot of my bed
with its careful collection of smells.

Seems almost like a parody, don't it?
Posted by Christine E. Hamm, Poet/Professor/Painter at 11:07 PM No comments:

Have a peek in my bedroom. It will never look as good as it does in the picture again. The moment has passed.

I'm still on the fence about whether I should get the brown and blue circle curtains that perfectly match the room. They're 200 dollars. 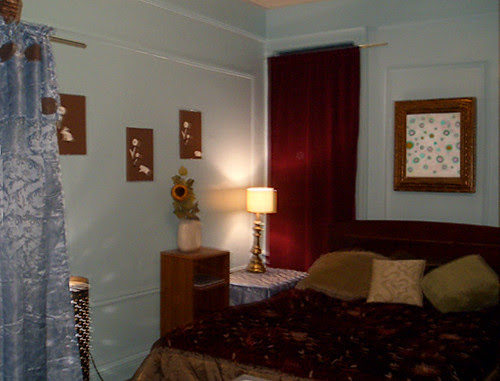 From one of Strand's. Might be... "The mountain"? I can't remember... I'm too busy to keep track of these things! shut up!

You have backed into this with your own arms,
finding the airplane, finding the stubborn mule,
descending always, one hand behind the other,
that is the way to unbraid it.

It does not please you, the way the valley stops,
paper in the air, a bike sighing its silver spokes.
Look here, the longer you stand still, the closer
you are to nothing.

Hey! the wonderful and smutty Desiree Burch has a blog. She's like a cosmo woman: fun, fabulous, fearless, funky, and she likes to say "fucker" a lot. Plus she lives down the street from me.
Posted by Christine E. Hamm, Poet/Professor/Painter at 1:06 PM 1 comment: